Get me outta here! 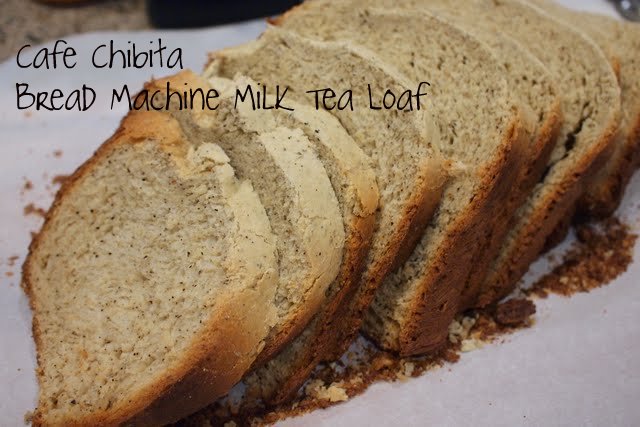 We ran out of bread at home, so I was going to buy a loaf of bread, but I was reminded by a dear friend that I can bake it! Oh yeah! I can!! And I have a new bread machine that I’ve only used once!! Time to take it out of the garage, dust it off and put it to good use!! 😀

My thoughts of this?…delicious!! It’s slightly salty, and slightly sweet. My loaf came out a bit dense, but I think that’s because my yeast isn’t very active (or it’s because it’s Active Dry Yeast) – so next time, I probably won’t use the basic bread setting and set my own rise-time to allow the loaf to rise longer – or I’ll just get some new yeast.  😛  I also didn’t think the flavor was very milk-tea-ish.  I could taste the tea in between bites, sometimes, but it just didn’t really resemble milk tea to me.  I think next time I will submerge the tea leaves in the milk and boil it a bit or use more tea? But it can also be because my tea has been sitting in my cabinet for a while?Not sure though.  😛  Other than the above two things, it was perfect! 😀 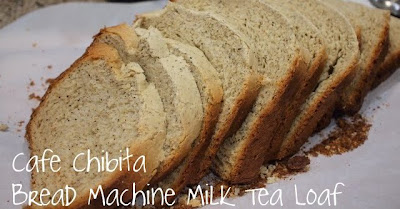 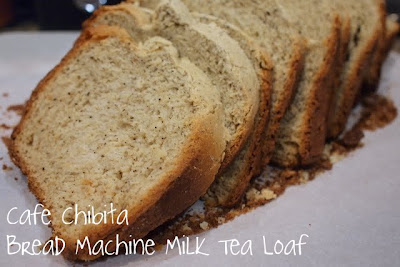 Today, while shopping at Target, Steven spotted this on the clearance rack in the kitchen section!! They were selling this open item for $139.99 (originally $199.99).  We went to customer service to MAKE SURE that this item is returnable in the case that it doesn’t work (the clearance sticker stated “As Is”), and it’s returnable!!

So…this is a new member to my kitchen family.  I can’t wait to introduce it to other members of the family…flour…eggs…water…yeast…I think they’ll have sooo much fun together!!

Although I’m super-excited about this machine, I can’t help but wonder why Zojirushi can’t change the exterior packaging a bit.  Just by looking at the box, this product looks like it’s from the 1990’s.  Don’t you think?

When I went to Hong Kong in January, my sister siujune helped me get this cookbook!!

In it is a recipe for Hokkaido Milk Bread Loaf. I baked it shortly after I returned home (left). Then, this past Sunday (actually it was many Sundays ago…I’ve been too lazy to make any posts), I altered the recipe some more and made buns (right).

The loaf came out a bit on the dry side, so I made some more changes to the dough when I made the buns. They are now PERFECT. Really really yummy!! 🙂 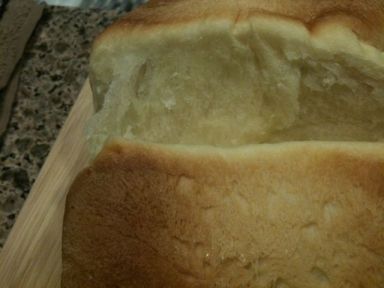 Look at the sponginess (is that how you’d describe this?) of the bun…so much more “stringier” than the loaf. 😀

On Saturday, I decided to bake these buttery goodness in a cup…these Sugar Butter Buns are soooo yummy!!!…now…I think my yeast was a little old…so these little things didn’t rise as much as I would’ve liked…but the flavor is sooooo good…although Miss Alley still felt that there should be more butter…

I got this recipe from Christine’s Recipes Blog. Because my dough didn’t rise as much as i would’ve liked, I had issues making the slits at the top of the bun…so I just left it. As for the butter inside each bun, I think I put 1/4 of a Tbsp for each bun…very fattening…but soooo tasty!! Another change that I made was that I put raw sugar on top of the buns. I like how it gave it a crunchy texture. 🙂 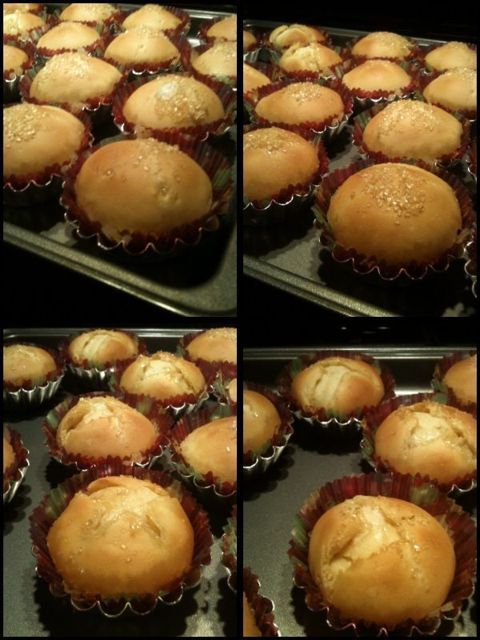 Update 11/04/09: I made another batch last night, this time, with a brand new jar of yeast. The buns rose very well!!!…much more fluffy!!!…:)…Miss Alley still felt that it’s not buttery enough…she insists that I use salted butter…I will try next time!!! 🙂 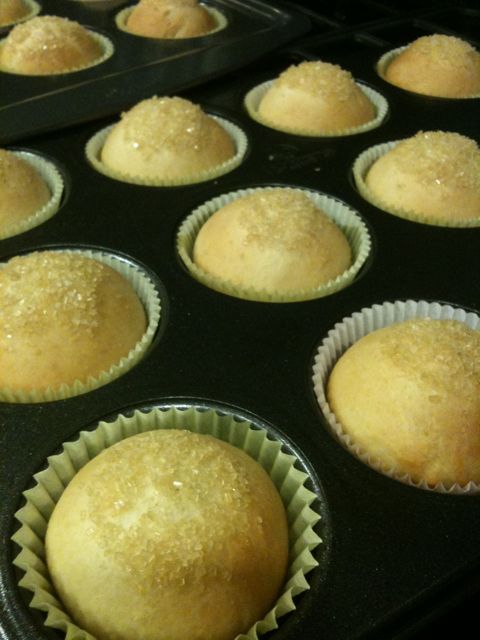 BBQ Pork Buns (May 27, 2009)
I was given a recipe to make some BBQ Pork Baked Buns earlier this week. My friend wanted to know if it comes out like the ones at the Chinese Bakery…the answer is…no…NSM (Not So Much)…

Unfortunately, I cannot share the recipe on here because it is a “secret” recipe. But trust me, you’re not missing out~~

Pork Sung (Floss) Buns (May 28, 2009)
I was browsing the blog “The Viewfinder of Mr and Mrs Kwok” and came across a recipe for Pork Sung Buns. I tried using the recipe, but kind of failed. Not really sure what I did wrong. The dough (as prepared per Mrs. Kwok’s recipe) was really wet, and could not be “shaped.” Therefore, I added enough flour to make it “shapable.” I probably added WAY too much flour, because when the buns came out of the oven, they were a bit rock-like. I picked one up and threw it on the cookie sheet, and all it did was bounce, nothing happened to the bun, not a crack nor a dent. So, needless to say, they went straight to the trash.

Pork Sung (Floss) Buns & Hot Dog Buns (May 29, 2009)
Because of the failure of yesterday’s Pork Sung Buns, I’ve decided to find another recipe (after all, I bought a tub of the Pork Sung). I found the Honey Buns recipe for the Happy Home Baking blog. I decided to transform these Honey Buns to Pork Sung Buns and Hot Dog Buns. I simply followed the recipe as is, except I separated the dough into 10 and not 9. Also, for the Hot Dog Buns, I used a mini rolling pin and rolled the dough into a longish-rectangular shape. Placed the Hot Dog at one end, and rolled it up. I let the Pork Sung Buns proof the same way as the Honey Buns, but the Hot Dog buns proofed with the hot dog rolled in it. After proofing,and brushing the tops with milk, I baked them at 375 degrees F for 12 minutes. After the honey buns were done, I simply brushed some transparent mayonnaise and topped with with Pork Sung. Here’s my finished product:

We felt that the bun to hot dog ratio was a bit low (ie: not enough bun for the size of the hot dog). So it was a bit on the salty side. Next time, I will use a bigger piece of dough for the hot dog. I haven’t tried these buns overnight yet, but touching it, it still feels soft. I will provide an update later.

Milky Loaf (May 29, 2009)
Aside from the buns, I also baked a Milky Loaf. Also, I haven’t sliced this and tried it yet. I will also try and provide an update of the loaf later. I think it’s a little bit on the darker end, so I will make sure to either cover it with foil, or place the rack lower.